It’s been a few days since my return to the U.S. from Davos, Switzerland, where I participated in the 2016 World Economic Forum Annual Meeting as a delegate and panelist. The focus of this year’s meeting was “Mastering the Fourth Industrial Revolution,” and it truly resonated with delegates, sparking intense conversations. The thirst for more information, more examples and more predictions was palpable. WEF founder Klaus Schwab characterized the Fourth Industrial Revolution as one of a fusion of technologies that blurs the lines between the physical, digital, and biological spheres. This will be the impetus behind transformations in every aspect of our lives, from government to business to economics to interpersonal relationships.

So, with all these transformations on the horizon, what issues have bubbled to the surface? I’ve taken some time to reflect on the major themes discussed this year, and what they mean for us not only as leaders, but also specifically as communicators. Here are my top six takeaways, with important comments from some of WEF’s most influential speakers. 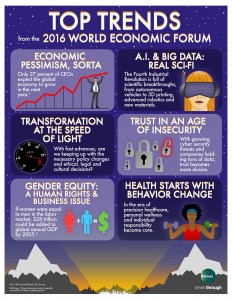 The wealth of information shared at Davos can almost overwhelm you, but there is no doubt that this is where decisions impacting our future are made. As communicators and as business leaders, we must be mindful of these important issues and to do our part to lead our organizations toward positive change. We must communicate openly and transparently, we should always act in accordance with the counsel we give our clients, and serve as role models for our future agency leaders. I, for one, hope that by this time next year, we have made strides in these areas and are prepared to tackle the new issues that arise at Davos 2017.