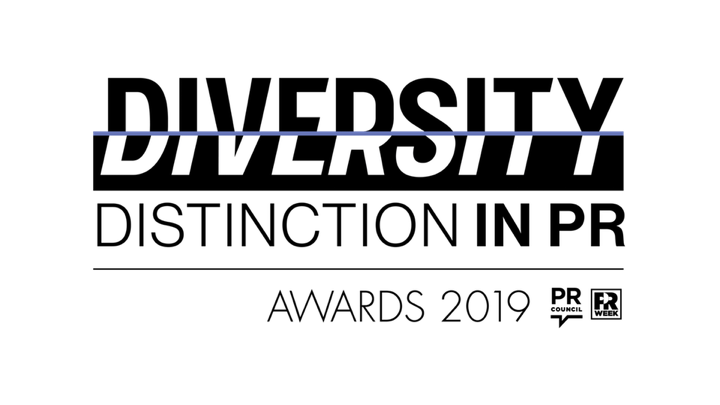 New York, New York – (September 19, 2019) – The PR Council (PRC) announced the winners of the ninth annual Diversity Distinction in PR Awards tonight at its annual Member dinner. The awards, sponsored by the PR Council in partnership with PRWeek, honor those who are taking action to encourage and strengthen diversity and inclusion across the communications industry.

“The winners and honorable mentions in this year’s program confirm exciting progress in making our agencies, Corporate America and the world more diverse and inclusive,” said Kim Sample, president, PR Council. “The winners are an awesome testament to the power of public relations and the combination of head and heart that PR professionals bring to making change happen.”

The PRC and PRWeek have partnered to conduct this important program for nine consecutive years and report smarter and smarter programming entered in the competition.

“We are inspired by the creative thinking and hard work the industry is doing to advance diversity and inclusion and hope the awards event motivates many others across the industry to commit to their own efforts,” said Gideon Fidelzeid, managing editor, PRWeek.

To combat hate-filled, white-supremacist rhetoric associated with the one-year anniversary of Charlottesville, Virginia, Porter Novelli launched its most ambitious diversity and inclusion initiative yet – to combat hate with love. For approximately two months, they filled their physical and virtual spaces with stories and acts of love. During this period, they published 20 internal eNewsletters featuring personal stories from more than 40 colleagues across their global network, covering topics from racial police brutality to Asian invisibility. Special internal programming like implicit bias training, field trips to LGBTQ and Holocaust museums, poetry slams, protest march attendance and impromptu letter-writing campaigns complemented the content-rich program. The firm is committed to spreading love through stories and actions with a year two of this initiative.

Judith Harrison, a tireless advocate for the advancement of women and underrepresented people, leads diversity and inclusion at Weber Shandwick. Judith’s collaborative efforts have resulted in a robust talent pipeline. In 2018, 25% of EVP hires and 22% of VP/SVP hires were people of color; 40% of promotions to the EVP level were multicultural. Since joining Weber Shandwick in 2006, Judith has guided the firm in its annual recognition as a champion of diversity and inclusion, with honors including the PRWeek/PR Council Diversity Distinction in PR Awards in 2012, 2013, 2015 and 2016, and the 2016 PR News Diversity Heroes Award as an Organization of the Year.

Rhonda Mims is EVP and chief public affairs officer for WellCare Health Plans, Inc., a leading provider of government-sponsored managed care services for 6.3 million families, children, seniors and individuals with complex medical needs across the country. According to WellCare CEO Ken Burdick, “Rhonda is an incredible leader. During the past three years, she created WellCare’s diversity and inclusion strategy from the bottom up, implementing initiatives and programs that support communities, promote diversity and drive results. ” Rhonda initiated WellCare’s Diversity Council and a Women’s Associate Resource Group (ARG) which addresses gender diversity issues and encourages female associates to take on leadership roles within the company and their community. She is president of the WellCare Community Foundation – a nonprofit which promotes the health, well-being and quality of life for underserved populations. She’s also president of WellCare’s Associate Assistance Fund (AAF) that provides tax-free grants to associates experiencing a personal financial crisis.

Diverse Talent Accelerators is a suite of solutions that Cisco designed and built to help find, attract and accelerate diverse top talent. The initiative’s objective was to give Cisco leaders business intelligence, geo-data, process automation, augmented content, and interactive guidance to locate and match the best people with the best opportunities. The suite of four solutions targeted at different management levels was part of a comprehensive Inclusive Workforce Planning strategy, launched in October of 2018. To date, 100% of CISCO’s Executive Leadership Team has used the solution to build customized Action Plans for their respective organizations to drive higher levels of diversity, inclusion and collaboration. These plans are now being cascaded throughout the company, where Cisco People Leaders are implementing them.

Best Campaign by a Diverse and Inclusive Team

To spark dialogue among advertising professionals about barriers facing people of color across industries, Havas Chicago launched its diversity and inclusion platform, #BLACKATWORK, in 2017. This collaborative effort provides participants with a glimpse into the experience of black professionals through an experiential campaign. The team built this platform using their own personal experiences, as well as drawing on the industry’s diversity statistics and harsh truth about pay inequality for Black women and women across all races. Since inception, #BLACKATWORK has developed annual installations which highlight a different facet of the black experience in the workplace through immersive activations. Havas is excited to continue #BLACKATWORK’s cultural dialogue, forging widespread realization that we all share a role in creating diverse and inclusive workplaces.

Aaron Komo is a senior social engagement specialist at Carmichael Lynch, where he’s worked since 2016. His fresh ideas for content, relevant timing, witty copy and smart partnerships have led to campaign success and client delight. Aaron is on the pulse of industry conversations, one step ahead of trends, and knows how to turn those insights into actionable tactics that lead to stellar results. Aaron is fiercely dedicated to growing the agency’s internal diversity and inclusion initiatives, as well as those of multiple organizations in the community. He is involved with CLOUT, (LGBTQIA+), ALLOY (D&I), MOSAIC (POC), IPG’s Merge initiative, and The BrandLab. Aaron is equally passionate about lending his spare time to many organizations in the Twin Cities community including Mu Performing Arts, the Nisei Student Relocation Commemorative Fund, and the Twin Cities Pride Board of Directors.

FleishmanHillard is on a mission to be the most inclusive communications agency in the world. Their relentless push for D&I is why they created FH Perspectives – an umbrella initiative for all things D&I. From hiring, recognition and leadership opportunities to client work and community, the impact goes beyond their office walls. FH Perspectives offers a roadmap for what FleishmanHillard looks like in 2020 and thereafter, prioritizing actions and investments which will accelerate their progress. Since FH Perspectives’ launch in March 2018 there has been a spike in diverse senior leadership and promotions for female employees. In addition, more diverse, inclusive teams have attracted a plethora of new clients – 2018 new business wins were at an all-time high.

M Booth launched the All Together Different initiative, unleashing a relentless focus on building an inclusive and innovative workplace which encourages people to bring their whole selves to work and thrive in a free, open and constant expression of individuality, opinions and beliefs. M Booth set ambitious goals to celebrate differences and guide them to become a more diverse and inclusive agency, including embedding D&I in company culture via internal and external events and sponsorships; establishing protocols to recruit, retain, and promote diverse talent; and driving more Boothers to get personally involved in diversity efforts. M Booth will continue to dimensionalize their commitment, bringing ideas to life from the ground up, supporting sponsorships, and evolving HR protocols to determine areas for improvement and actionable change.

Leader, mentor, expert, counselor and diversity and inclusion champion are just a few words used to describe Trisch L. Smith. An agency veteran, Trisch has often been one of a few or the only woman of color in the room, and she has dedicated her career to creating more seats at the table for those underrepresented in the industry. In 2015, Smith was named Edelman’s first U.S. Managing Director of Diversity and Inclusion. She then became the first Global Chief Diversity and Inclusion Officer. In this role, Smith guides Edelman’s organizational structure and programming surrounding D&I, oversees training and development, recruitment and external partnerships to ensure Edelman’s workforce reflects the increasingly diverse marketplace. Smith has led the firm’s award-winning multicultural practice, providing senior counsel to clients to evolve their brands and effectively engage diverse thought leaders, consumers and other stakeholders.

Karen Kahn is HP Inc.’s Chief Brand and Communications Officer. With 25+ years of reputation and storytelling experience as a journalist and communications/brand leader, she is responsible for creating and connecting HP’s narrative to the social, economic, cultural and technological truths of our time. A tireless advocate for gender and racial equality and leadership throughout the technology industry, Karen has spearheaded social impact programs including HP’s marketing and communications agency scorecard, which measures the company’s racial and gender equality efforts. She also championed “Reinvent Mindsets,” an award-winning short film campaign aimed at increasing diverse representation, while reducing unconscious bias. Karen’s purpose-driven commitment to strengthening HP’s business while moving the industry forward is demonstrated through her mantra: “Companies must stand for something bigger than the products they sell.”

HSBC Now is a communications channel which publishes films that celebrate the lives and work of HSBC colleagues via internal and external HSBC platforms. In preparation for World Autism Awareness Day 2019, HSBC Now set out to celebrate neurodiversity at the bank by producing two films in which neurodivergent colleagues spoke about how being “wired differently” helps them in their role, as well as the benefits that different thinkers bring to the business. By sharing colleagues’ bold, personal stories, HSBC Now demonstrated the values of the brand internally, as well as to a significant external audience. The success of the initiative has led HSBC Now to produce more films about neurodiversity and has inspired parents of neurodiverse children to form a resource group at HSBC, through which colleagues can meet and share their experiences.

BEST CAMPAIGN BY A DIVERSE AND INCLUSIVE TEAM

H&M’s Stay True, Stay You campaign, accompanied by the non-binary Love For All capsule collection, aims to reveal authentic and relatable stories of the LGBTQIA+ community, while celebrating their unapologetic personal style and self-expression. Video and photography were filmed in everyday settings and featured actress and activist Laverne Cox, internet phenomenon and social media star Rickey Thompson, YouTube influencer Shannon Beveridge, and blogger couple Brock Williams and Chris Lin. The diverse LGBTQIA+ cast are co-creators, sharing their authentic stories in the LGBTQIA+ community. be it on the subway, in the grocery store, in a small town, or in a big city. Viewing and listening to their personal stories, the public learns and understands that we are all cut from the same cloth. H&M’s commitment to the LGBTQIA+ community, as demonstrated through the Stay True, Stay You campaign, is boosted by its already valiant efforts supporting DE&I like World Pride | Stonewall 50 launch event, the NYC Pride March and the United Nations Free + Equal Campaign partnership.

Rita is a Senior Account Executive at Edelman Miami where she is part of the Corporate practice. Since joining its team in 2015, she has been instrumental in its growth and success. A significant contribution to note is her work for Roche Latin America, one of the agency’s largest and longstanding clients. In 2018, Rita played an integral role in delivering results that garnered a SABRE Award Latin America, as well as being named a finalist for the Platinum SABRE for the project “Empowering Health Journalists in Latin America.” As the lead of Edelman Miami’s Citizenship team, Rita works closely with non-profit organizations and is actively involved in employee volunteerism.