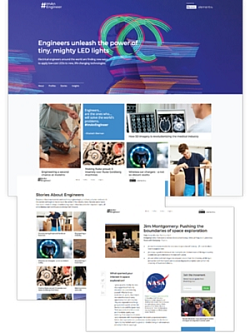 Newark element14 is a high-service distributor of technology products and solutions for electronic system design, maintenance and repair. A respected player with an 80-year history in the electronics industry, Newark element14 has developed an online community that provides purchasers and engineers with access to peers and experts, independent technical information, helpful tools and serves as an engineering hub.

Engineers are the heart and soul of Newark element14’s business and some of the most misunderstood professionals on the planet. Although engineers drive the modern innovations that improve daily life, they are often perceived as awkward introverts who work in dark, isolated labs.

Today the company sells to engineers who span the full spectrum of interests, backgrounds and experiences. They are first-generation college students, teachers, hobbyists, entrepreneurs, artists, women and minorities. They’re real people who are directly involved with the issues that shape our world.

Newark element14 approached Walker Sands to develop a campaign that would dispel common myths about the engineering profession. By shining a spotlight on actual engineers and their work, Walker Sands would help Newark element14 speak more directly to an increasingly diverse customer segment and become a public champion for the modern engineer.

Walker Sands immediately recognized that tackling engineer stereotypes would require much more than a traditional PR or social media campaign. Rather than relying on guesswork, Walker Sands went straight to the source and surveyed Newark element14’s online community of more than 400,000 engineers to understand the challenges, stereotypes and needs that most affect their day-to-day work.

The results of the survey uncovered several important concerns:

After extensive branding exercises and research into Newark element14’s customer personas, the concept for #ImAnEngineer was born. The campaign would revolve around a new content hub, ImAnEngineer.com, built and designed by Walker Sands.

Through original news articles, customer profiles, video interviews and in-depth research reports about the issues modern engineers care most about, #ImAnEngineer would provide a platform that celebrated their work and gave them an avenue through which they could weigh in on the technologies shaping the next decade of innovation.

One of the key challenges of the #ImAnEngineer campaign was that it would require a steady stream of new and original content. This content took three forms:

To meet the campaign’s extraordinary content demands, a dedicated team of writers at Walker Sands wrote and published new material daily, conducted interviews (phone and in-person) with engineers, and compiled research reports on everything from skills gaps in manufacturing to the representation of minorities across disciplines of engineering.

After four months of aggressive coding, designing and content creation, #ImAnEngineer launched with a library of original stories, profiles and reports. To drive reach and organic growth, visitors engaged in conversations on social media using the hashtag, #ImAnEngineer.

All pages included buttons with pre-populated tweets, and Facebook, Google+ and LinkedIn posts. Bi-weekly email newsletters were created and distributed to #ImAnEngineer subscribers, and Newark element14’s marketing team used the content in brochures, mailers and printed materials to reach customers and partners.

The site was also promoted at a major industry event, where Newark element14 met with key partners, influencers and journalists to inform them about the new platform and hand out #ImAnEngineer “business cards.”

To further increase the impact of the campaign, the Walker Sands team used display ads, extensive social promotion and remarketing. Banner ads showcasing top content and profiles were also designed, encouraging viewers to click through and explore the site.

The #ImAnEngineer campaign was a total success, significantly outperforming the high expectations discussed during the initial planning stages.

Over the course of six months, the campaign achieved several major milestones:

“The #ImAnEngineer campaign presented a unique challenge. It’s not often that we’re asked to change entrenched perceptions about an entire industry,” said Allison Ward, Account Director at Walker Sands. “But by leveraging our capabilities in PR, digital marketing and content, Walker Sands was able to deliver a campaign that exceeded Newark element14’s wildest expectations and made a serious impact in the way we view engineering professionals.”